For a short period of time, I was seeing ads on Facebook promoting a documentary which examined the world of 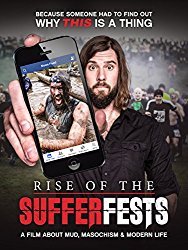 mud running. It was called “Rise of The Sufferfests” and it examined why people are so interested in obstacle course racing (OCR) and why this is a growing sport.

To be honest, even though I would see ads for it multiple times, I felt I didn’t need to watch it because, what could I possibly learn from it?

But it had a lot of fans and a lot of positive feedback, so recently, I purchased a digital copy of it from Amazon and I just finished viewing the 1 hour 30 minute+ documentary.

Here is my review of the documentary…

For the most part, the core of the documentary centers around the creator of it, a journalist named Scott Keneally whose aiming to find out why the sport of obstacle racing is so popular.

The 3 most common reasons throughout the documentary discovered that people do this stuff for are:

There isn’t really anything being experienced that is primal or challenging and these obstacle races make up for that.

A lot of people aren’t able to compete or travel and do physical challenges outside their normal lives and possibly the gym, so having access to these events makes them live out this “subconscious” need to live and put themselves in danger to feel alive basically.

2) There is an element of narcissism for a lot of people who do this stuff.

People want others (on social media usually) to see what they’ve done and get appreciation for it basically. This explains a lot about why the Tough Mudder page on Facebook for example has so many fans and likes.

The same goes for Spartan Races and these other mud runs too.

In the documentary, the person who points out this theory of narcissism is actually one of the highest tier athletes in this sport whose name is Amelia Boon. I’ve never heard of her until this documentary but she is an amazing athlete who does this for her own fun but basically doesn’t seem to be a fan of people who like to show of that they do this.

3) And finally, the reason I most resonate with:

People just want to challenge themselves. They want to explore new things and see what they can take. That’s basically me in a nutshell when it comes to obstacle races.

I don’t care about being filmed, nor do I prefer it, to me I just want to have skills that stand tests like being able to pass rough terrain and challenges. It makes me feel more alive, and frankly, as one of the interviewees in the documentary said (Laird Hamilton, tsunami surfer), we appreciate life more from doing this type of stuff.

Now after the documentary asks about this main question, there’s pieces where I found some very interesting information, such as the history and facts of it and some stuff I found quite surprising. For example:

1) The supposed original creator of these races was a guy whose nicknamed “The Mouse” and he is quite a character (to say the least). He basically started making these obstacles in his “large” backyard which slowly attracted a bunch of people overtime and this led him to make it an event, called the Tough Guy which until the documentary I had never heard of, but based on what I saw, it may be more difficult the more mainstream OCR’s out there.

But the man who made it, wasn’t so much interested in taking it mainstream as much as he had a passion for putting people through the ordeals he set up to test them.

Now through this idea supposedly, the creator of Tough Mudder was the one who took the concept, mixed with the challenges British Special Forces go through and created the event which would then become arguably the most popular OCR in the world.

3) Speaking of sports, the creator of the Spartan Race, one of the most popular OCR’s wants to see the event held in the Olympics.

4) There was a part towards the second half of the documentary which talked about injuries and deaths in these things, and with the exception of one unfortunate death taking place during Tough Mudder, when it comes to stats, OCR’s are actually safer than marathons and triathlons and when you think about it, it makes sense.

5) About 30% or more of the contestants are women. Speaking from experience, I do see a lot of women on every OCR I do.

6) This industry has grossed half a billion dollars in sales. Now I don’t remember if it was for a year or overall since their beginning.

7) OCR’s are growing and I can attest to that.

8) There is even some talks about how many of the fans who follow this “sport” are quite fanatical about it and downright go with it in a cult like behavior. I do admit, I have seen “clubs” of people dressed the same way who act a bit over the top when doing these things.

Overall, is it a documentary worth watching?

I have to say, I enjoyed Rise of The Sufferfests. It is from what I know it is the first documentary of it’s kind which talks about this industry.

It doesn’t make fun of it, nor does it endorse it, but rather gives several points of views from people who enjoy doing them and ties it into the heart of the reason that people are so enthralled to try these events.

These OCR’s have been a bit of an acquired taste for me. The first 4 I did, were not to my liking because they didn’t seem creative or challenging enough, but once I did the Spartan Super, I became pretty fascinated with challenging myself further which is why in about a month, I will be doing the 12 mile Spartan Beast.

There is indeed a popular market for OCR’s and frankly, I don’t think it’s going anywhere. If stats show right, these races are only getting more and more popular.

Perhaps one day, Rise of the Sufferfests will be seen as a pioneer documentary that was the first to truly explore the world of OCR’s.

Now I have 2 questions for you all!

23 thoughts on “Rise of The Sufferfests. A Review From an Avid Mud Runner.”