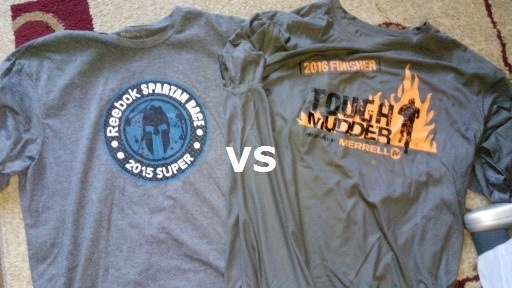 Being that the Spartan Race and Tough Mudder are considered among the most difficult races in the obstacle racing topic, there is often debate between which of them is harder and more fun.

Fortunately, now that I have completed both, I can help you figure this out if you’re considering these events.

Here’s my resume of the OCR’s I’ve done:

And by the way, if you’ve done these too or are planning to, please share your questions/experiences with them below! I’d love to know 🙂

Let’s compare which event is harder!

To begin, I’d like to note that there’s different levels of each event so what I’ve done is balance out which each levels from one course are similar in terms of difficulty and length in the other and I will explain which are more difficult:

There are 4 main levels to the Spartan Race and also 4 in Tough Mudder (there’s a 5th one, but it’s for kids and I won’t count it).

What are the biggest similarities and differences between both events?

First we’ll see how both courses are similar:

And surprisingly that’s about it. I though there would be more until I actually did the events and saw there were many differences:

Another big difference in comparing the events:

The location of each event you do plays a big role in how difficult it’ll be. Both events can be held in locations where the terrain is either more or less flat and places where it’s on mountains or hills where basically you have to climb.

If you do any event on a flat area like a stadium or where my last event was held which was in a dirt bike park, it’ll likely be flat so you’ll get less tired from running.

However, if you do one or both events in places where there’s mountains (many events are held on ski resorts and that means uphill hiking), the level and difficulty increases by a lot so when I did the comparisons of both events, I actually looked at it from if both were held in flat areas and if they would held in steep mountainous areas.

I still believe should both events would be held on the same terrain, the Spartan would still be more difficult.

Whichever you decide to do, make sure you have these 3 things:

1) Physical endurance, in the cardio and strength department, especially for the Spartan Race.

2) Don’t go alone, especially if you’re doing Tough Mudder since it is more team oriented. You can get help and WILL get encouragement from other fellow contenders there, but it pales in comparison to having close friends next to you rooting you on and everyone help one another during the obstacles. There’s going to be comedy, there’s going to be bonding, difficulties and overall, there will be great memories if you go with friends.

Which event suits you more?

It depends entirely on your personality and physical level.

If you are the type of person who really enjoys individual challenges and doesn’t like getting help like I do, then the Spartan Race is going to test you.

However, there are also very difficult challenges in the other course that even I had trouble doing because as I said before, there is more technical ability needed to complete the challenges vs brute strength and will power.

If you enjoy something with a team element involved, like to try out fun obstacles that don’t just challenge strength, but your brain and can give you a little bit of an adrenaline rush, then you should definitely try this one instead.

Ideally, you should do both events if you enjoy the whole element of outdoor challenges and obstacles so you can decide which event you like better.

Which event do I prefer?

Neither, both are fun! Like I said before, the Spartan Race challenged me way more, but Tough Mudder was the one where I had a lot more fun, even though it challenged me less. So it depends on how I feel.

I’ll be updating this comparison in the future when I do more of each race, so I can literally compare the obstacles side by side and even do video comparisons as well. But no matter what new updates come, I’m still going to have the same opinion of both of them 🙂

Update: My specific reviews of Tough Mudder and the Spartan Race…

So I did 3 Spartans, but finished 2 of them due to the third getting cancelled:

Here is my review of the Spartan Super I completed.

Here is my review of the Spartan Beast I also finished.

And as for Tough Mudder…

And in 2017, I also successfully another one in the same location, but the first one was more fun.

94 thoughts on “Settling The Spartan Race vs Tough Mudder Debate From a Guy Who Did Both Events.”