While just about every popular mud run will have both genders running through, there are those designed for only women. We’ll go over 2 of the most popular races you can partake in if you’re a female!

The first is the “Dirty Girl Mud Run”.

It is likely that Dirty Girl is the most popular mud run for females. While only 5k and open to any female contestant over 14 years of age, it is still challenging enough for first timers who have never gone through these obstacle races before.

There are 10 obstacles that will be challenging for first timers, but for those who are fit, it is likely that they may not be as interesting and while Dirty Girl is the most popular race, it is recommended that if you’re seeking a bigger challenge, to face one of the most longer and difficult races like these, where men also compete.

Still, when it comes to THIS particular race, it is fun and just about anyone who doesn’t have any medical conditions should have a great time with their friends and family members on there. Here’s a link to Dirty Girl Mud Run.

Originally, this was an even that was up to 7 miles long and full of obstacles as well, making it longer and possibly harder than Dirty Girl. Yet something has changed…

If you try to look up this race, it links to Tough Mudder for some reason. In fact, any pages that originally had this race, now point to the other race. It is possible that this race is no longer in business and it does happen, as with the case of BattleFrog which recently cancelled all of it’s races.

But what it now points to more often is the “Tough Mudder Half” which is a 5+ mile race, but it is not just for women, but men too.

There are a few other races for women available, but they are local ones you’d have to find, otherwise, Dirty Girl and the other (which may be unavailable) are the 2 mainstream choices.

Well anything I recommend men wear, I will recommend the same for women, namely these things.

I would say those 3 things are the most important, but for the list above, you may also want to consider the other 7 things.

Also if you’re more experienced and enjoy wearing something “unorthodox”, consider costume ideas like these people come into these races with. Believe me, it can get pretty shocking as to what people can think of wearing to these things!

But overall, anything you wear, traditional or not will get dirty, and possibly even ripped a little bit if you’re not careful, so don’t worry about investing too much money into the clothing. If you get through the race without damaging it, that’s great, just wash it and have it ready for next time. If you’re careful enough, you can re-use the same clothing for at least 2 or more events.

Again, every type of training regiment I have listed to get ready for mud runs applies to both men and women. Train harder for the more difficult races and a bit more liberally for the less difficult ones.

For Dirty Girl, you probably won’t need much more than the ability to be able to jog 3 and a half miles and do some basic strength training regiments as well as scale monkey bars. If you can do all these 3 things, not only are you ready for Dirty Girl, but chances are, you’ll also be ready for just about every single 5k race there is, with the exception of the Spartan 5k which, while the same distance, is more intense in it’s terrain and obstacles.

Keep in mind, you can always participate in ANY of these other races:

While I am a man who has done a bunch of these races, I have often seen teams of women doing them and having a great time. Here’s some of the obstacle events I’ve done:

And in all of them, women were always participating as well. I will mention that the difficulty of something like Dirty Girl is not that different from the other races that feature both genders. You’ll still get similar obstacles and similar difficulty, unless you specifically do a more advanced race.

So if you can’t find one of those female only races in your area, don’t worry about looking up one that has men in it too, as the obstacles are probably similar and you’ll have the same kind of fun.

If you want, you are free to make your own female only team and register as such on every race’s website. You can also make your own uniforms or enter under a specific team name and go through the event that way if you wish. Basically…

Even if the race you find isn’t just for women, there’s many areas made for you:

Many of the obstacles in most of the events have different sections for each gender. For example, in areas where you lift weights, women will get a slightly lighter weight to lift and carry.

Just because both genders run through the same course doesn’t mean they have to go through the exact same version of the obstacle/s. So you don’t have to worry about having to face the same level of intensity if you don’t want to 🙂

While you’ll free to go through the men’s obstacles as well, just know that you can always pick out a different version if you’re not comfortable with it. Personally some of the weights I had to carry in something like the Spartan Race were too ridiculously heavy for even me and I would have preferred something lighter!

Either way, if you find any more mud runs that are only made for women, let me know!

5 thoughts on “Are There Any Mud Runs For Women? Why Yes There Are!” 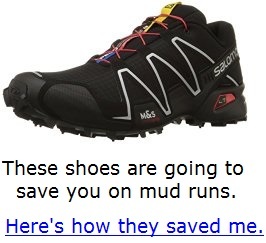