I finished the Spartan Super Race in 2015 and went through all of it’s obstacles. Let me tell you, if you’re not prepared, like I was, do not do it. I barely finished this Race because I greatly underestimated it and I suffered massive consequences including not being able to walk right for several weeks.

I also made some huge errors in wearing the wrong shoes and by a miracle managed to come out without twisting anything.

Let me cover all the details of my Spartan Super experience, help you prepare for one if you decide to try it. This review is going to help you learn from my mistakes! 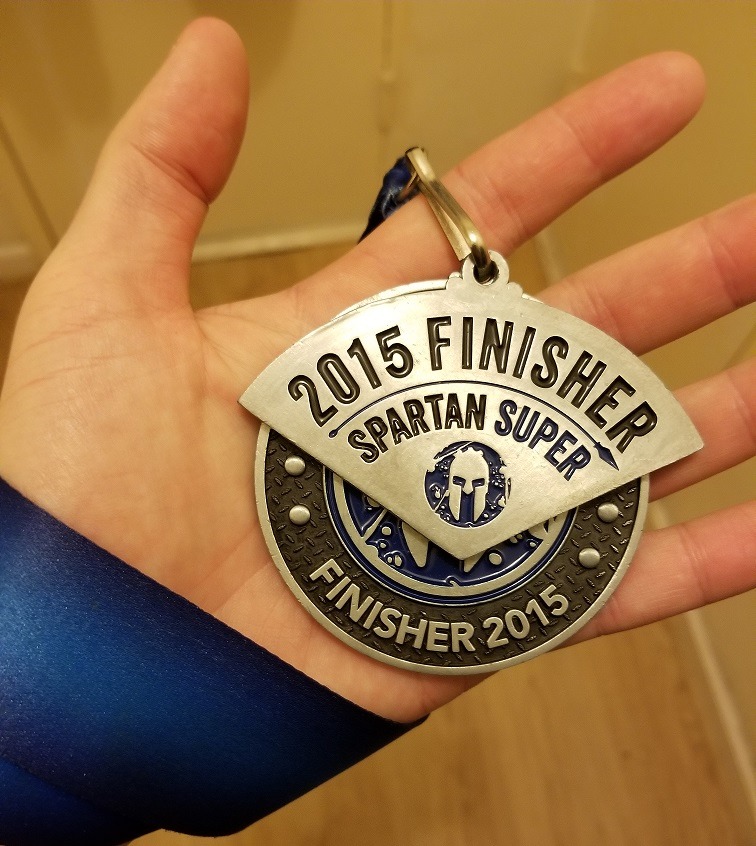 If you’re wondering why I would take such a tough mud run so lightly, it was because my 3 previous mud run experiences, one of which was a Sprint and 2 other 5 km events, Survival Race and Mud Man X were pretty easy, so I didn’t expect this one to be that different.

When I did it, I was 3 other people and it was on a ski resort called Blue Mountain. I would later find out this specific location had some of the hardest obstacles and overall challenges.

Although there are more than 20 obstacles on the course, the most difficult parts of this race are the:

We had to walk almost to the very top of the mountain 3 times. This was the hardest part of the whole event.

My thighs were killing me. So you’d better prepare them because even though this isn’t an official obstacle, you’re going to remember it. When we had to stop, it was because we couldn’t walk up anymore.

When I tell people what to expect on Spartan Races, I tell them that the uphill climbs make up MOST of the event, so practice for them using these tips.

The designers of the Spartan Race basically troll you with this obstacle. No only are you walking and in pain, but they also make you carry weights.

In the event we did, there were 3 obstacles involving weights and taking them down hill, then uphill:

One of the first involved carrying a heavy sandbag that weighted about 30-40 pounds. Carrying it downhill was no problem, but when the terrain suddenly shifted upwards and we had to walk up about 200 feet on what felt like a 70 degree angle, it was torture. I had to stop at least 4 times to take a break.

The next challenge like this took place a few miles after that one. We had to carry pieces of logs the same way (down and then up). They didn’t weigh as much but they were very uncomfortable to carry. There was also someone who dropped one of those logs and they rolled downhill very quickly. That can be deadly if it hits someone.

The last challenge like this was close to the end of the event, after mile 7. We had to take a bucket, fill it with gravel and do the same thing. This one had the easiest slope, but it was also the longest and the weight was much, much heavier, around 50 pounds. You weren’t allowed to carry it on your shoulders, otherwise they’d have you restart it.

The other obstacles you’ll see:

Unfortunately, the Spartan Race (all it’s versions) appears to be the only event whose site doesn’t actually show all of it’s obstacles. Typically most events have a whole list available so you can prepare but in the Spartan Race, most of it is a surprise so I will do my best to describe each area we passed and tips on how we were able to do it.

When we started the event, we had to jump over a few logs. They were about 3 feet above the ground, but you had to roll over them to get over. You won’t be allowed to go around, of under it.

Obviously, the walls. There’s going to be walls you’re going to have to jump to reach the top and then pull yourself upward to get over them. There’s about 5 of them on the course. Some are about 10 feet high, but they do have smaller ones if you’re short.

There were 2 challenges where we had to carry a small, but heavy boulder about 20 feet, drop it, do push ups, pick it up again and bring it back where to it’s spot. The other one had us carrying logs with chains attached to them which we held onto.

There is a challenge where you have to climb about 20 feet on this net looking obstacle, then over on the other side to get down.

There are a few challenges which aren’t difficult but where it’s easy to slip where you climb a wooden wall that is vertically facing you, then when you get to the top, it slopes diagonally. There are a few others that are shaped like triangles, which you climb from one side, then out the other. There was a metal one with nets we had to go over. That one was about 40 feet high and about 70 feet long.

One obstacle had us swing across horizontal poles, but they were in mixed levels where the first pole was higher than the next, then after, it was high again so you were swinging up and down while going horizontally through this area.

There was also a lifting area, where a sandbag was attached to a long rope which stretch about 40-50 feet high. You are supposed to lift the sandbag by pulling on the rope and this part is very difficult. If you drop the sandbag or let go of the rope, you have to restart. I finished this challenge by using my foot to hold onto the parts of the rope I’d pull on, that way if I let go, I still had my foot holding onto the rope and holding the bag.

Of course, there’s always a spear throwing area with Spartan Races. The distance to hit the target is about 20 feet and they do something which makes it a lot harder which is they tie the spear to a rope and have you stand behind a gate to prevent stealing, but when you do this challenge, make sure to pull the rope entirely and then put it over the gate where you’re not allowed.

Then when you throw the spear, you won’t have the rope pulling it back: 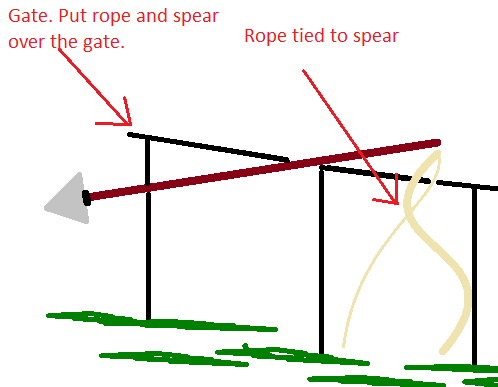 Update: Instead of this horrendous picture, I’ve got my own spear throwing photos and techniques here to help you complete it!

One was where you have to hang either upside down or over the rope and pull yourself from one metal end to the other and the next was just a regular rope climb.

That one was about 30 feet high and above very cold and muddy water. The rope was also very wet which made it very slippery. If you have gloves that can help your grip here, wear them. Also if you use a j hook when climbing the rope, it’ll be easier.

Several areas of the event also had a steep hill you had to climb by holding onto a rope and using it to pull yourself up.

Swimming is also a part of this race. We had to swim across a small lake that about 150 feet long. There were inflatable boats in parts of it where you have to dive under them. If you can’t swim, there is an alternative area next to the lake where you just walk through the water.

There is also a monkey bar type obstacle where you have to use rings to swing to the next one. This one was very difficult and it was towards the end of the event.

One balancing area is in this race too, where you have to walk across a wooden pillar that is horizontally above ground but about 2 feet.

There is also several walls with bumps in them you have to climb on the side of.

Update: It’s called Z Wall. This part is extremely difficult especially if you do it after a swim because it becomes very slippery. Although the rules of the Spartan Race say you can’t hold onto the top of the walls, I’ve had to do it or else I wouldn’t be able to finish this area.

The final hard obstacle in this event is a LONG, rocky and muddy area…

Where you have to crawl or spin under barb wires. Spinning is easier to do but you will get dizzy. Crawling is slower but you should wear knee and elbow pads here.

When training for the Spartan Super Race, train for the length of the race. That is the most difficult. Happy racing! 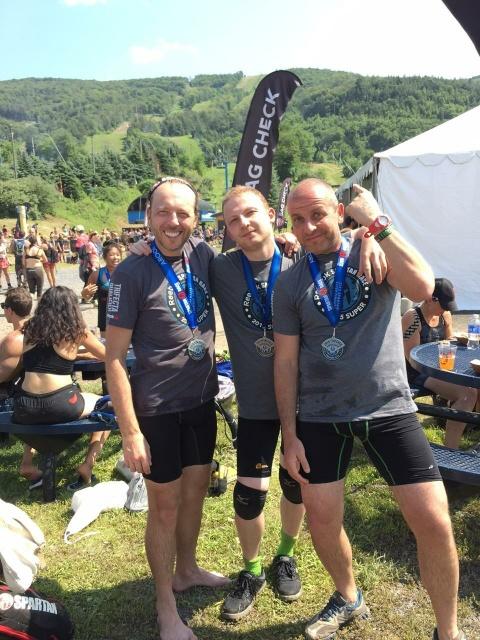 Our finisher photo! If you’ve done of these races, how was it for you? The three of us (plus a new member) recently also did a Tough Mudder. Let me say, it was quite different than the Super!

1) I wrote really bad sneakers, wear these ones. I fixed that mistake with the next race I did (The Beast) and it truly changed things!

2) Never underestimate a Spartan Race. I stumbled onto the one which was in hindsight known to be hosted in one of the toughest environments.

3) This was the first race where I saw hydration packs being used and for later events, I got myself this one and it made dealing with the hot environment so much better!

4 thoughts on “Spartan Super Race Review. I Was Not Prepared For This.”