Of all the obstacles I have faced on various mud runs, it appears that Tough Mudder may have the most challenging ones. There are up to 25 of them.

Now keep in mind that for this and many other mud runs, these obstacles change, so you may see new ones if you decide to try one, or even some that are on this list, not appear on the ones you do.

First, there are 5 different types of Tough Mudder:

1) The regular race: It is up to 12 miles long and the one most people do (I will be doing mine in October!). And also, don’t mistake this event for the Spartan Race. Here are the differences between them.

3) The one known as the “Toughest Mudder”: Basically the regular race, but you do it at night. Supposedly there’s new obstacles coming out in 2017!

4) The 24 hour event where you run through a the same course as many times as possible. BattleFrog has this type of race as well!

5) Then there is a kids one which is only a mile long.

If you are a beginner, do the half (5 mile) version. If you are intermediate or higher, the regular race will be challenging enough (or you can try these other mud runs)! And if you’re an insane athlete, the 24 hour one might be the most appropriate challenge for you!

Now, we have the list and wow…it’s not a joke… 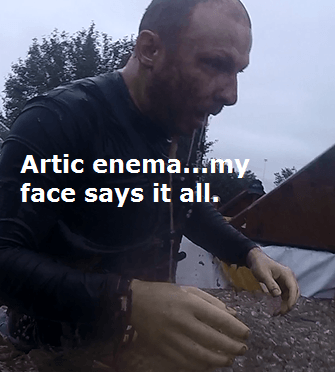 Artic Enema: Many Tough Mudder races begin with this obstacle. You jump into an icy bath to get you started! Sometimes it is dirty (if it’s further down the event and people who already were dirty when they got in had it on them) and sometimes it has a coloring over it. If you’re not used to taking cold showers or even diving into icy water, you better get ready!

Update: In the Tough Mudder I did, this obstacle appeared about halfway into the race.

The “Block Ness” Monster: This a team effort challenge where you have to maneuver over several blocks that are floating above water and rotate as you try to climb over them. The key to beating this challenge is letting one or more team members climb over it while the remaining one hold it at the bottom and as one or more members crawl, they push the block over to get them over it. It’s like a push but it can make the obstacle less difficult for the climber.

Then if the person gets over it, he or she has to hold it from the other end so it doesn’t flip while the people who were 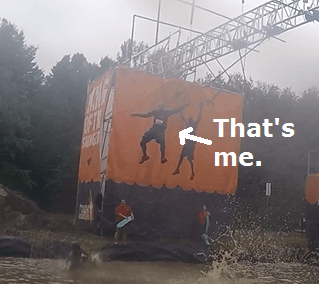 originally holding it can now get over. You’re probably going to have other teams doing it with you so make an effort to work with them so that you all get over this without losing too much time.

King of the Swings: This is a scary challenge where you swing across a pole, not rope, then take a major risk by letting go and trying to hit a bell in mid air. Then after that, whether or not you hit it, you’re still going to fall into dirty water.

I honestly thought this was the coolest obstacle I did, but it didn’t appear in the second Tough Mudder I did, which actually happened to be in the same location.

Pyramid Scheme: This is an obstacle where you have to cross a triangular prop that is about 7-8 feet high, but it is extremely slippery so often just running up to it and up may not work.

A lot of teams actually completely this hurdle by laying on the side of one of the pyramid walls and letting their teammates walk above them as a way to keep their grip, then there’s also other people at the top who will often help you up.

If you and your team choose to do it the first way (where you lay down), then it’s your job as the person who climbs above them to help the members at the bottom reach the top.

Cage crawl: You basically swim on your back with a cage literally touching your face. It creates a bit of a claustrophobic effect (helpful tips for this challenge!) but the key is to use the cage to move your body through this obstacle. Don’t focus on the water or that it’s scary, focus on pushing your body using your hands and nothing else.

Birth Canal: Well…this is an interesting obstacle in that it somewhat resembles you being born? That’s certainly one way to describe Birth Canal, but in reality, you’re crawling on dirty with a heavy prop weighing on you the entire way.

The Liberator: You grab a piece of wood and have to use it to climb a wall. There are holes on the wall you have to plug in with that wood you have and basically that is used to get you over.

Mud Mile: It’s not actually a mile long, but it’s basically a bunch of mud mounds like you see in Warrior Dash. It’s very slippery and very, very dirty.

Everest: A run up a very high wall. Usually the faster running start you get on Everest, the more chances the momentum will be able to carry you to the top. This obstacle is very similar to the one on American Ninja Warrior!

Berlin Walls: This is a vertical, 10 foot wall. There’s usually a handle to step on a few feet up that you can use to then propel yourself over the top.

Skid Marked: The Spartan Race have this type of challenge where you have to get over a wall that is slanted against you, but on Tough Mudder, when you get over it, you will have to step on tires that are against the wall to then jump over them to land on the ground.

Funky Monkey: You’re going to need super human grip strength here. You first have to cross monkey bars but this is not on a horizontal level, oh no, it’s actually slanted upward, but even if you do get over that, then next part is the descent but it’s not on monkey bars, it’s on a pipe that is usually very wet. This is one of the most challenging upper body obstacles you will ever cross.

Hold your wood: This is another team effort challenge where you carry a heavy wooden log across a few walls. Some of them will have holes where you’ll have to put the log in and take it out the other side. 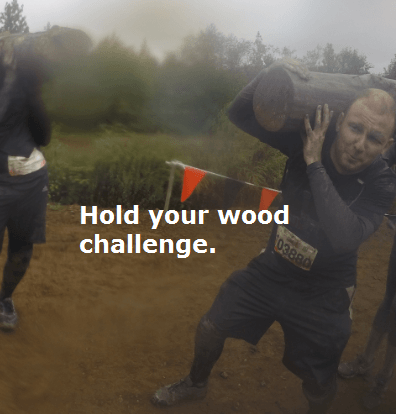 Warrior Carry: You have to carry a teammate up or down a hill while they are on your back.

Quagmire: You go through a very dirty trench that is filled with water. There’s little space so you’re really stuck in a line (thus the name Quagmire).

Balls to the Wall: You have to get over a wall using a rope but can use your feet to grab onto the wall itself. Then on the other side, you also do the same thing.

Kiss of Mud: A crawling challenge on dirt. Oh and it’s under wires too :).

Shawshanked: Usually there is an obstacle that leads to it, but eventually the challenge itself is a crawl through a dark pipe.

Electroshock Therapy: Yep, you’re going to get shocked and it’s going to suck…I have been lucky to only go through this kind of hurdle in one of the 4 races I’ve done (it was on MudmanX). I hated it, but it was somewhat optional to get through because I could kind of avoid the wires. In Tough Mudder, you won’t be able to. You just have to dash through it. Typically Electroshock Therapy pops up right before the end of the race. 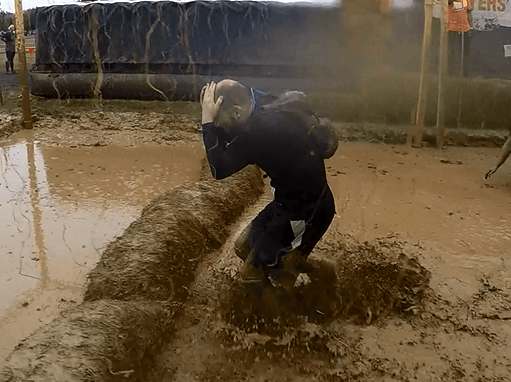 There are also obstacles for what are known as “Legionnaires”: You get to test new obstacles out before they become part of the main race. In 2016, there are several new challenges. You can check out Legionnaire challenge here.

If you think you’re ready for this race, see if you have the gear and physique to take this race on!

Do not do it unless you are very physically fit. This race is very difficult to cross and remains as one of the hardest tiers of mud run events.

17 thoughts on “A Full List of Tough Mudder Obstacles And Yes, They Are Extreme!”