I got lucky with picking out knee pads for my first mud run because the same ones I will recommend here have been used over and over by me.

Having had existing knee problems before I entered my first mud run, I was worried about getting them injured and it was then that I purchased a pair of pads to protect me on the race.

While I don’t think that there is actually a specific type of knee pad that’s best for mud runs, the ones I had were more than fine and frankly, I think they’re perfect. Although they have taken tons of damage in the several years I’ve had them and to add to that, I haven’t taken good care of them, they are still used today and as I will be entering my 5th mud run in October, they will be coming with me yet again.

So what is this brand I’ve used? They are called the Mizuno T10 Plus Knee pad.

How did I hear about them? I didn’t, I just went to a Modells (like a Sports Authority store), saw what was on the shelf and purchased these without any prior experience. Here’s a picture of me on the right wearing them, post a Spartan Race I did.

It’s not the biggest picture I have of them and they look very dirty because this was right after we finished, but they didn’t rip and felt great to have on.

Although I purchased them at a local store, you can get the same Mizuno pads I use here.

How it felt to wear them on my races. 7 instant benefits:

1. It made bending down a lot less painful. Being that there is a lot of bending, jumping, falling, crawling and explosive movements done in mud runs, you can be rest assured that your knees are going to get tested and being that mine were already in pain prior to the race, wearing these pads made it a lot less painful.

2. There’s something about the fabric that made it absorb the water/mud and it actually gave me 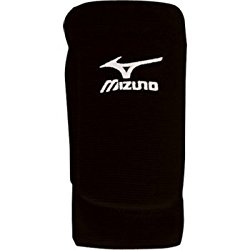 extra protection. From what I know about the material, it combines cotton, spandex and polyester. Being that there was a lot of dirt and water on all these races, these pads were constantly soaking.

However, they were also absorbing and retaining some of that moisture too and it turned out to be very helpful for extra protection because in addition to the existing padding that’s on them, the moisture they absorbed felt like an extra protective layer was added.

Basically, the existing protection I had before I started each race while already being good (and clean), felt even more covered during the race (when it was already mixed in with the water and dirt).

You would think that the more liquids it absorbs, the worse and less mobile you’ll get, but this will not impact your running at all. Now it doesn’t completely absorb every liquid it comes in contact with, so you don’t have to worry about them getting too heavy. In fact, by the time you are well into your race, they are going to feel like a part of your body.

3. The basic protection you get from this feels comfortable and keeps you mobile. There is protection on the front and sides of this pad. I’ve ran into walls and banged my knees a few times against them as well as trees, rocks and when I slipped and hit the ground. With these things on, the impact was felt, but it didn’t hurt my knees at all.

4. It basically cushions any area you run into and protects from things like rocks. Having crawled through the pits of many mud runs, a lot of them tend to have rocks sticking out so it would have made for a terrible test on my knees had it not been for the protection I had.

Ironically, despite them being classified for volleyball, they have been used for a lot more than just that sport:

5. I’ve used them for the following activities as well: Basketball, strength training workouts, soccer, MMA, and I also use them when I go hiking so as you can see, the Mizuno pads have a lot of uses beyond just being used for volleyball.

And like I said, in addition to all of that, I’ve already crossed 4 different mud runs with the same pair and still put them through ordeals in other places where I train.

6. Basically, this all adds up to an incredible amount of durability these things have which is also another major bonus of having them. And they are also easy to clean up after you’ve used them. Ironically, if you just leave them outside, they’ll dry up fast, but I do always recommend you throw them into the washer after they do.

I’m not really sure why they are classified under just volleyball protection gear because their uses go beyond just having them for that sport.

7. It’s difficult to tear them. Despite dragging them a lot through dirt and other areas, the friction didn’t really do much damage to them. This just adds to that durability. Of course I do not recommend that you go around and literally try sliding on rough areas with these.

You should be trying to keep them useful for as long as possible so unless you have no choice but to drag them through dirt, don’t.

Should you get 1 pair or more?

They are pretty cheap but I would recommend having an extra pair of them in case you overuse them or something happens to your original ones. 1 pair is under $20 and considering how long they can be used, keeping another 1 is a good investment. You may find that bringing an extra pair on race day helps because often times I have found fellow teammates have neglected to bring them.

Anyway, for these races, I strongly recommend using the Mizuno brand I used (get them).

Will they provide your knees with full protection from any challenge on a mud run? Well for the most part yes, but it shouldn’t encourage you to be reckless on the course and put your knees through ordeals they don’t have to go through.

Obviously you should treat wearing this as though you aren’t actually wearing them, to make sure you run through the course safer and prevent injuries like these from occurring.

4 thoughts on “What Are The Best Knee Pads to Use For Mud Runs? These Rock.”