2017 marks the year that I did 2 mud runs: The Spartan Beast and most recently Tough Mudder. While the latter race was much easier than the Beast, I underestimated it and because of that, I almost broke my foot.

In addition to that there were new and familiar obstacles that I had to relearn and change my approach to in order to beat them in the future. Here are my experiences, what I learned, and what you need to take from this so you have a great time. 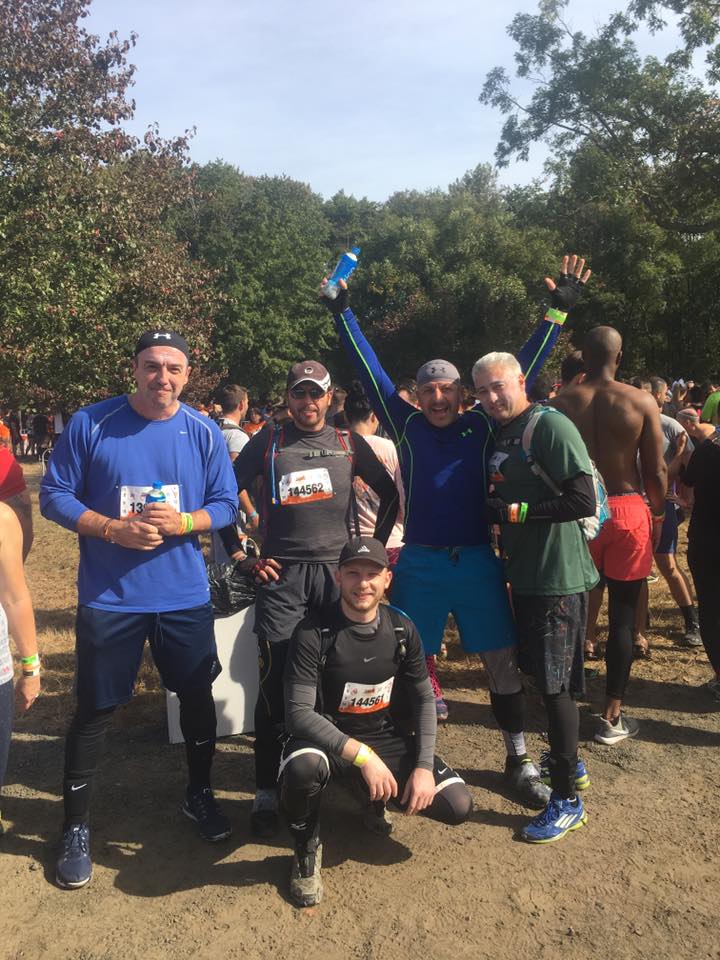 1) This was my second Tough Mudder, at the same location.

I originally did this race last year at a racetrack in New Jersey. While I enjoyed the event, I found it to be very easy, so when I was invited to do it again, I expected the same difficulty.

What ended up happening was that, while the event’s location was the same, the order of obstacles and the way the map was shaped was totally different and in most cases unfamiliar to me. Some new challenges came up…

2) Here were some of the new/same obstacles I went through:

I actually wrote about the new obstacle because Tough Mudder’s site did announce them, but nevertheless going through them was a lot different than reading about them:

Usually, in this challenge, you have “cliffs” of slippery mud to climb and in between is very dirty water. While my first run through this challenge a year ago was easy, the mounds were small and good enough to get a grip on, this time around, it was way harder.

The mounds were higher, more vertical and more slippery. Without having a helping hand, I was not able to climb any of them. Also some of the mounds has breaks in them, meaning if it was underwater and you couldn’t see the breaks, there was a big risk in putting your foot into one of these things and twisting it.

So if you do mud mile, please be very careful and slowly plant your foot down when you step into the dirty water so you can feet the ground and make sure it’s stable and there are no breaks.

I really don’t know why they continue to use this obstacle, it has no taste or creativity. You just crawl underneath these bags filled with water. The only difference this year was that I did the “legionnaire” version of it which wasn’t that different, you just crawled through dark bags, but otherwise, the rest was the same, and it was boring.

Ok, this obstacle was cool, and even somewhat scary. This is still a legionnaire challenge (regular one is called Augustus Gloop, but the advanced is Snot Rocket), but I had to dive underneath these barrels, surface with my face up against a cage (there was only enough space for my nose), work my way backwards into a tube, then scale the tube upward and I did it all with my GoPro, so I was basically 1 handed.

I’m not trying to show off, but you should also be able to do this with one hand. This obstacle isn’t really difficult, it is just a little bit scary to dive into the water where you can’t see anything and then climb the tube. And also, there is water falling on you inside that tube. 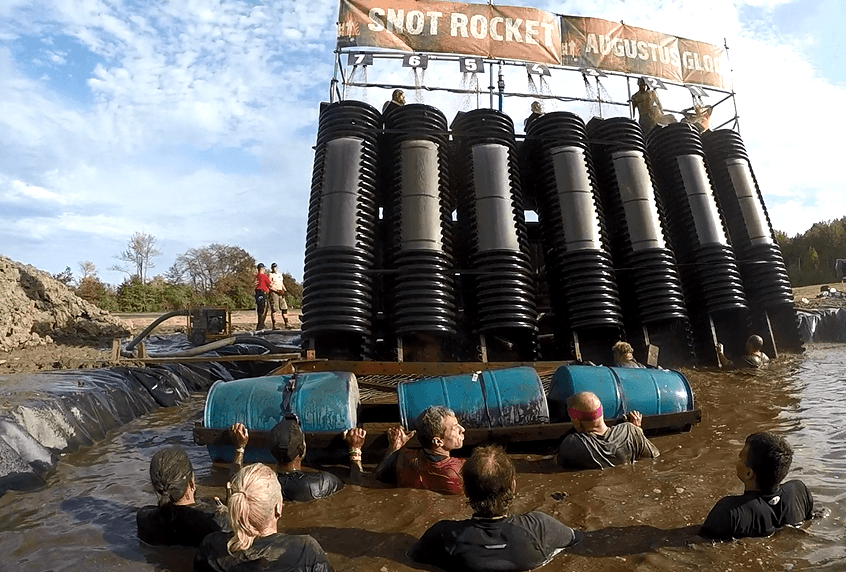 I did enjoy this obstacle. 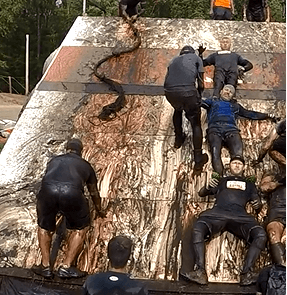 but when trying to execute the plan this time around (for the first time), we failed.

It wasn’t that the idea I had didn’t work, it just required one additional tip. Basically my plan for pyramid scheme was having one person (the strongest) be at the bottom, then have up to 3 other people climb him/her, and stand on each other’s shoulders.

Then the strongest would make his way up the other 3, then the others would also work their way up, but putting all that energy one the bottom person for so long is incredibly difficult as I had personally found out since I was that person.

While I could have possibly held out with 3 other people standing on me, time was limited and so was my strength, so the ONLY adjustment I would make to my strategy is to have 2 people stand at the bottom, not 1, and then have the other 3 climb the rest.

The thing is, my team consisted of 6 people so we had to adjust to this, but odds are, you may have other people offer to help you (and use you) to climb up the pyramid, so if you adjust the strategy and have more people at the bottom of it, you’ll have better leverage to hold onto the people on your shoulders.

None of us could complete Kong because of the long lines… 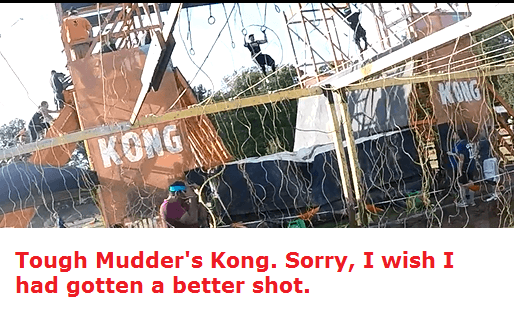 Kong was actually one of the last obstacles my team and I were looking to do (well just my team since I got injured…). But the problem was so many people were scared to do it and the wait time they had amassed had slowed down the people behind them, so we just elected to skip that obstacle altogether.

There was NO king of the swings!

I was VERY disappointed as this was my favorite obstacle the first time I did Tough Mudder. I was very much looking forward to flying across the air and hitting the bell. Yet unfortunately, it wasn’t part of the obstacle list this year 🙁

There was literally almost a mile of mud crawling.

One of the sections of the race had us going through a forest, that was “littered” with thick, deep mud. I elected to go around it as much as I could because it stunk bad and it was also very draining. This was not around last year.

And finally, the accident I suffered on Tough Mudder…

This happened on the “Stage 5 Clinger” obstacle. While climbing the monkey bars, I swung to one of them, slipped and the slip caused me to fall at an angle right on my right foot onto a skinny piece of wooden board, which as I landed on, twisted, made a bad cracking sound and forced me out of the remainder of the race. 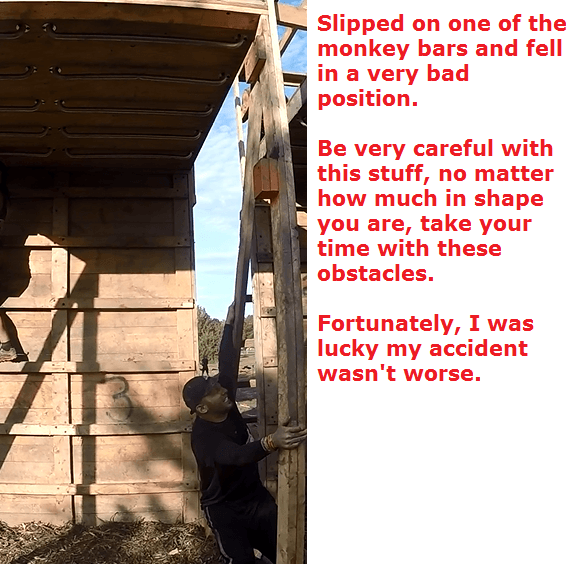 While there was little of the race remaining, I had to opt out of the next and final obstacle which was electroshock therapy because I could BARELY walk. Luckily, my foot, though swollen and badly hurt was not broken.

-What I got absolutely right again was the shoes I recommend people wear and the clothing people wear for these things. They have not failed me yet and I felt very protected.

-Even if you do an event in the same location, do NOT expect the map to be exactly the same, they WILL flip it around, change the obstacle list and adjust/remove certain aspects of it.

-I would exercise a TON of caution on the Stage 5 Clinger. I was extremely unlucky to fall in the way I did, but learning to climb monkey bars better would have prevented that. Please be careful with this one, these challenges sometimes have us think less, act faster and that puts us at bigger risk.

-I consider myself a high level athlete, but accidents can totally happen and looking back at my accident, I can’t believe how lucky I was to fall so badly and come out with a major sprain, not break.

-While I enjoy Tough Mudder more than the Spartan Race, this New Jersey location is one I will not be doing again, because at this point, I feel like I’ve done all I can with this event, at that location. The next one has to be different and more difficult.

– Stretch out at multiple times throughout the race (especially your quads). I didn’t do this last time and had tremendous aches the next day. Because I did not make this mistake on this race, I woke without a single pain in the body, aside from my foot…

– Do not expect professional help from the staff. If you need a bandage, anti bacterial cream, you will not get it on any of the obstacles/water stations. All these people do there is simply call in help to get a truck to carry you to the medical tent that does have it. In short, the staff, if you need help, are pretty useless, so carry your own safety supplies for mud runs when you’re there.

I find this to be extremely ridiculous, risky and lazy on the part of the Tough Mudder organizers, yet easily correctable. So fix this Tough Mudder people.