To me the though of wearing a nice or strange costume to an event where you’re going to get dirty is strange, but it’s really a thing and in this case, mud runs are the sport where lots of people who like to participate wear costumes and let me tell you, I’ve seen some that are quite out there…

Let’s get the basic outfits out of the way. The most common are uniforms.

It is very common for team members to wear similar uniforms and outfits to represent themselves. I have seen some incredible looking outfits being worn by men and women (oh I love the outfits they wear!), but here are the most ridiculous ones I’ve seen and I’ve got to say, they definitely made my eyes turn:

Yes, the rock band Kiss. In my most recent race a few months back, while my wave was waiting to start the race, we saw the previous wave passing by us and guess who comes out? 4 team members all dressed like Kiss. They walked up to our wave and gave us all a high five.

Yes THAT Moses. In the same wave that had the Kiss team, a man dressed as Moses also made an appearance. There must have been something about that wave that attracted the costume fanatics…

Now the guy who wore this outfit went all out with it. He wore the robe, had the stick and beard, everything. But half of it was extremely dirty because of the mud he’d been going through.

3) A man wearing something that isn’t exactly traditional…

I am talking of course…about a thong. I kid you not, there was a man , on our wave who was going through the entire race in nothing but a thong and shoes. I do give him credit, he was doing this without a single care and even showing off! He did get a lot of attention from other competitors!

Complete business suites mind you, WITH a briefcase. They were running on a track behind us, but when they crossed my team, they were completely wet and still keeping to their costume’s theme.

Now this wasn’t from my experience, but from watching a YouTube video of people going through what’s known as Electroshock Therapy. I was looking at that video for reference and as I examined it, BOOM, a man appeared in what looked like boxers, while wearing a rat outfit.

The surprise of seeing something so unusual (and after every costume I’ve seen so far!) made me laugh.

Unfortunately there is a lack of pictures to show all of these experiences because during the Tough Mudder race where I saw 3 out of the 5 costume examples, I didn’t have my Gopro on. The only time I did was when I was doing an obstacle, where Mr. Thong ran through.

I will tell you though, that people on every race that I’ve seen who see these things are very encouraging to those who do this. They applaud, clap and cheer them on so if you are the type whose shy but your friends are trying to get you to wear something, consider that:

Here are ideas for mud run costumes if you’re into this:

Here’s a whole Pinterest page dedicated to this concept.

Is it wise to wear costumes to these races?

I like seeing unusual things, things that make me and other competitors laugh and seeing people wearing clothing that makes us smile is not something I’d ever be for making a rule against, but it is important to understand that the riskier your outfit, the more chances a simple slip, fall or injury can be worse if you’re not protected by a layer of traditional clothing that’s more suited for these races.

Let’s take our friend, the thong wearer, suppose that person were to fall or get cut somewhere. Just about his entire body is exposed to all the unclean elements of a mud run and if he were to get cut, there would be more chances that he could catch an infection.

And then there is also the outfits which make moving much more difficult. Take a person who puts on a full dress or robe, and imagine how difficult it would be for the to run through the obstacles of a these races when they can barely move around.

These types of clothing can be risky, especially for these activities because they can either impede your flexibility or they can worsen what would be a normal injury.

Now this isn’t supposed to turn people away from wearing wild outfits and I would recommend them for more experienced runners who understand what’s necessary to get through these races without injuring yourself, but for beginners, it’s not worth the risk.

Wearing traditional mud clothing for these races is really the safest:

Now traditional mud run clothing varies, but here’s my 10 must wears. I think wearing those things maintains your flexibility and keeps you safe, including your muscles (which will kept warm). Here’s a sample of what I usually wear: 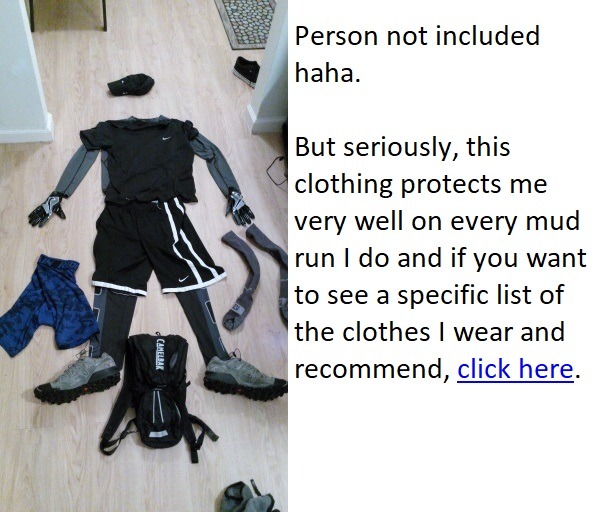 Are there any rules against wearing costumes to these races?

No, although you are advised to wear certain kinds of clothing and generally they give you some good ideas for staying safe, they aren’t mandatory and you can go “crazy” with the costume ideas, but keep in mind the risks that go with wearing them as well.

If you are the type whose doing a mud run for the first time and really want to wear something unusual, at least do an easy 5K race first and be careful. At the very least, no matter how crazy you go with the outfit, at least make sure to wear some good sneakers so you reduce the risk of slipping.

7 thoughts on “5 Mud Run Costume Ideas That Are Both Ridiculous And Awesome!”