There were 2 obstacles I legitimately feared going through in Tough Mudder and one of them was electroshock therapy. I have a video of myself passing it.

However, after I was yelled at by my uncle to just dash through it and hardly feeling the zaps hitting me, I discovered that there was a great way to do it.

Compared to how awful the experience was in MudmanX where I was shocked much worse, the one on Tough Mudder was MUCH less terrible (in MudmanX, I was crawling with my head exposed to the wires, in the other, I had to run through and my feet were what was exposed to the wires).

So why is it that in one I was shocked a lot more than in the other and more importantly, why is that so many people get zapped like crazy in electroshock therapy and what can you do to prevent it? Here are my theories:

Every person I saw running through in shorts, without a shirt, basically with substantial areas of skin exposed got shocked like crazy in this obstacle.

Why is it that more skin exposed causes more shocks? Well my theory is that the hair on all exposed areas is basically a static. It makes it easier for the wires to zap you. 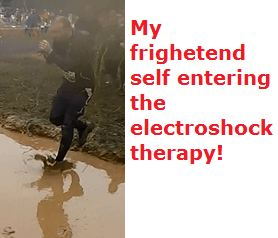 It wasn’t until after I did electroshock therapy, the adrenaline went away and one of my teammates pointed out that by wearing rubber like clothing, basically rash guards and leggings, it reduced the pain of the zaps tremendously that I realized that I only got zapped twice and hardly actually felt it.

The shocks I experienced from MudmanX was enough to drop me, while the ones in the other race were felt, but didn’t halt my movement.

There were people like my uncle, his friend and myself who wore fully clothed fabric that went through this obstacle easily. Then there were the others who didn’t wear enough that didn’t and we know what happened to them. What to wear to get less zapped.

3) Do NOT wear anything that is made of wool.

You’re asking yourself for a bad experience if you do. Wool naturally attracts static as does exposed skin. Besides, I can’t think of any reason to wear wool on a mud run, any mud run for that matter…

4) Understand that you can BYPASS this obstacle.

While there are rules in Tough Mudder that say you “can’t” skip obstacles unless you’re in the legionnaire club, the truth is that they put up a board that says who this particular obstacle is not for:

Basically people with health problems and fillings in their mouth (metal). That said, if you have these problems, you shouldn’t be doing this obstacle at all.

I personally have 2 crowns and some metal work done, but I still went in and did it. I would not recommend someone who knows in advance that they have these fillings or health problems (heart) do it.

So if you do have these, let whoever is in charge of regulating the runners inside this challenge know. They can’t force you to do electroshock therapy.

The same goes for other obstacles, such as this.

As far as I also know, if there are no legitimate reasons for you to skip an obstacle, the staff won’t force you to do things like burpees which you do have to do in the Spartan Race (I admit, I weaseled out of a few of them!).

Also I did another Tough Mudder race a few years after this one, and because I suffered a big injury right before electroshock therapy, I decided to skip it.

5) By the time you reach this area, you’re going to be very tired and desensitized.

Generally this is the last obstacle on Tough Mudder and when you get to it, you’re covered in a lot of mud (which can also help prevent extra zaps) and are very tired. Use that to push you through this and know that the finish line is close shortly after!

Are there any ways to practice for this?

Not any safe ones that I know of so don’t try doing something stupid like tasering yourself before hand. This is not a productive way to prepare for this.

The only thing I would say is: Wear that clothing and dash as fast as possible through it. Tough Mudder often likes to mix up the way they structure this obstacle. For example:

They may make it a long dirty an slippery run without water, but you have to dash through about 20-30 feet of wires.

In mine, it was also about 30 feet, it was in about a foot of water and about 10-15 feet you had a little mound to jump on top of. That’s where I slipped and then had to crawl through to finish.

Other than that, wear something that’ll make it less likely to slip. My salomon speed cross 3 saved me on this. But in the video I’ll show you of me doing it, I was running through without any issue, and then somehow I slipped…

So basically no matter how they structure the next electroshock therapy, the only thing you can depend on is:

Unless you’re a masochist and enjoy getting zapped, do one of those 3 things. I know there are people who love this kind of stuff but even if you’re fully health and prepared to run through it, I always have doubts about long term risks of getting zapped.

I wouldn’t take the risk of doing it with less clothes or if you have one of the specified rules where they tell you that it’s not for you. Just protect yourself, get through it quickly and move onto the next thing (although after that obstacle, the race ends).

Knowing what I learned from that experienced has made me ready to take on the next Tough Mudder or any mud run with an electrical challenge knowing that I’ll be prepared (although I still have horrible post experiences from the MudmanX zaps).

There aren’t many obstacle courses other than those 2 that I know of which have an electric zapping challenge, but check your race before you go just to make sure. If they do, you already know how to prepare! And if you want to have a laugh beforehand, check out this video of other people doing electroshock therapy:

4 thoughts on “Worried About Electroshock Therapy in Tough Mudder? Do This.”