I really wish I had kept myself updated on the news that GoPro was going to be releasing the Hero 5, because a few weeks before it was released, I got myself the 4th one (black).

Although I was and am still very happy with it, I really though that I had the best one there was, then after hearing the new one was coming out and it was promising to be even better, I took awhile to think about it, but eventually bought it, mainly because I was immensely impressed with how well my first one performed on a mud run.

Now that I have both, I though I’d do a “comprehensive” comparison. I’m not really going to go into numbers or every tiny detail each camera provides, but I will give you the major comparisons, such as how the video and picture quality compares, which perks are available more so on which camera and overall if whether or not, one is truly superior.

I have done a full review of the GoPro 4 before and I will take elements from that article to do the comparison here.

The 5 ways we’ll be comparing the cameras:

Picture quality. The winner is…

Both. I took a series of pictures with both cameras and have put them side by side. In rare circumstances, specifically when there is light, the Hero 5 captures it better, whereas in every other circumstance, both cameras pretty much produce the same exact finish: 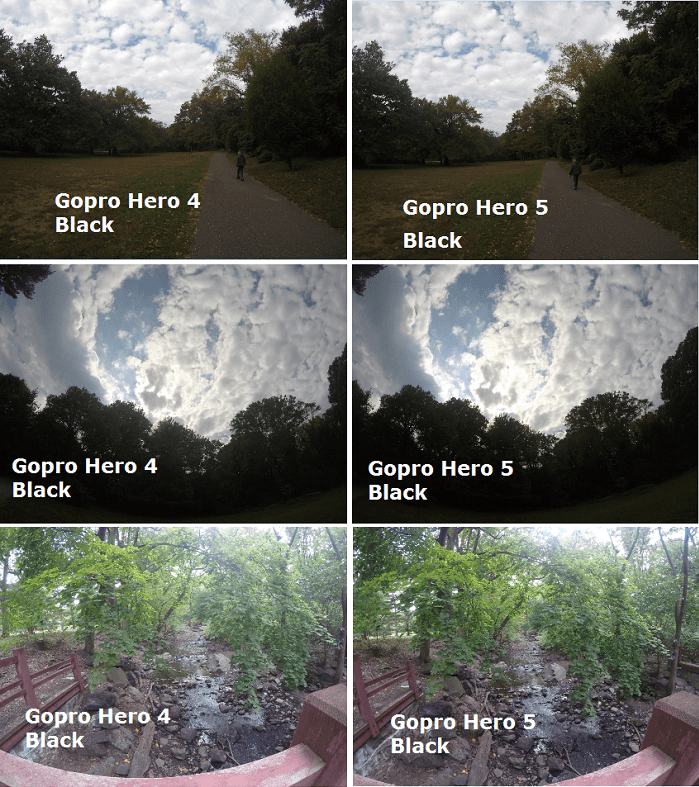 You tell me where you in these pictures you can see a difference. Had I enhanced and make the overall pictures larger, sure you may spot a slight difference in the photos, but honestly, they are the same. Both have a 12 megapixel camera.

However, remember I said that thing about the lighting and the Hero 5 capturing it better? Here’s a specific side by side comparison where this is somewhat noticeable:

Now I only noticed this specifically when it came to areas where there was more light. Every other instance, the photos are identical pretty much. Here is another example where an area with more sun is seen more so with the Hero 5, specifically the orange tree leaves in the middle of the photo:

I honestly do not think this slight difference makes one better, to me both cameras produce basically the same images.

For those of you who have done prior research on the Hero 5, you may know that it has a feature in it that stabilizes the video when you’re shaking, jumping or moving around, preventing that from showing on the actual video and producing a much more smooth video. That is not part of this specific comparison, but it will be a perk I will mention shortly below.

All we’re looking at here is how the video image quality looks in both cameras, not the extras that go into making that quality and in that regard in my opinion, both cameras are equally great. I will try to set up some videos to show them right here, but basically the same kind of images you get from both, apply that to a video and you basically get the same exact result.

What exactly makes this camera more convenient to the 4? A lot of things honestly and this is where we will cover the overwhelming majority of perks the Hero 5 has on the 4:

First obvious thing is the actual digital screen that it has. When I first turned on my Hero 5, I had a few basic set ups including the time and date to put up, but otherwise, the screen itself isn’t as responsible as say a smartphone screen, BUT having this available to you makes looking at images and videos right on the spot possible vs the other one where you would have to either wait until you got home and exported the files OR connected it to your phone and that would only work if you had Wifi (by the way, both cameras have it).

Voice recognition. This is another cool thing that I personally haven’t used it for, but it is NOT available on the other one. You can basically call out actions for the camera to activate to start filming/taking pictures.

There is a cut/editing option available on the digital screen. Once you take pictures/videos and look them over, you can cut out clips. You can ALSO delete the media you don’t like right on the spot with this camera if you need to have extra space. Again with the other version, you can’t do this unless you export the files first and erase them of the SD card.

There are also other editing options within the camera available that I really have not yet figured out.

1 button turn on feature. Say you are in the woods and something exciting happens, like maybe a baby dear shows up or you get chased by a bear (hopefully not). With this camera, you can start filming and have more chances of catching the moment FASTER because of the 1 button turn on and start recording feature: 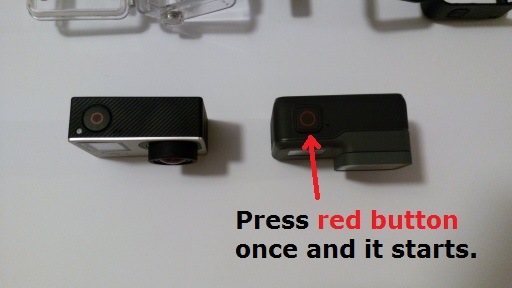 With the other option, you can’t do that. If the camera is off, you have to hold the mode button for about 3 or more seconds before it begins, then activate the camera with the red button. 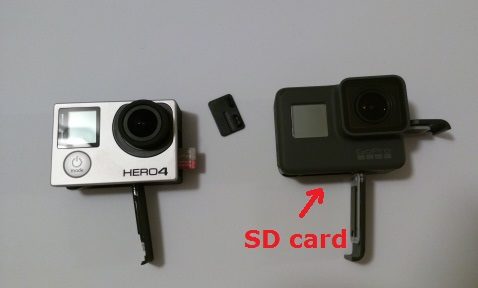 I also didn’t like that the batteries and even the USB cable for both cameras were different. I find this a waste of money since now I’ll have to buy 2 different batteries if I ever want to have an extra pack and speaking of batteries, another convenience is that the Hero 5 appears to have a longer battery life, despite technically using up more media from what I saw.

Which is more durable? The winner is…the Gopro 4, as long as it has it’s case.

One thing which turned me off the Gopro 5 was that the default camera itself was somewhat exposed to getting broken or having the lens and screen cracked, despite it being a lot tougher than most screens.

You see, the default case+camera you get with that one comes with a very minor protective case that only really covers the main outer layers, leaving the lens itself, the front screen which shows which feature is on and most importantly the digital screen open for possible damage.

However, it is also true that the same default bundle is also the one you can use to put underwater and take right away on your adventures: 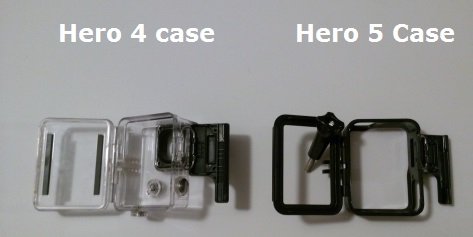 Now notice the little screw I put on the right case. I put that there to show there is no protection from this case, the screen is exposed and if it falls on a rock or crashes somewhere, that screen can crack. On the 4, there is TOTAL protection, thus giving it more durability.

Where would this durability come in handy? A mud run and this is VERY important:

I completed a mud run with a GoPro 4 and let me tell you, I am glad I didn’t take the other one with me. With all the dirt my camera had on it and everything that happened, I would not be surprised if the digital screen cracked or some dirt got in through the main case and affected the functions.

Well then just buy a protective case right? Well true, but it’s a little bit tricky to get this right…

The price. The winner is…well both.

The 4 costs $449 usually (well the prices are changing ever since the new one came out but it’s more expensive) and other one is $399 (Get the newest GoPro).

However, if you consider the lack of durability and being able to take the Hero 5 through some tough adventures, you may want to get yourself a FULLY protective case for it which is about $30 or more, which if you do that, makes the price for both cameras pretty much the same!

Get the right case…

I actually recently ordered myself a FULL case because there is no way I am ever going to take my Hero 5 on an extreme adventure, like a mud run where I feel it’s going to be at risk of breaking and the problem is that with MANY cases I have seen designed for it basically look the same as the default case it comes with and that STILL leaves the same problem areas open.

Now the case I got actually covers everything, including the back screen which means I won’t be able to use the touch screen. It’s basically the Hero 4 case, but fitted for a 5 (and no, they are different so I can’t use one case on both cameras).

Alright so I got the case and while I think it looks a bit “cheap”, it is a much better alternative than the default case you get. Couple of things: It is much bigger, but it can be worn on the same straps and be used the exact same way you’d use the normal case.

One thing though, I was right about the back of the case not allowing you to be able to touch the screen so if you plan on using this case, be aware that you won’t be able to use the screen until you literally open it. Would I recommend this case? Only in extreme adventures…

Protect your camera fully if you’re going on mud runs, don’t risk going without it…

Considering that on something like a mud run, you’d most of the time keep the camera on your head or chest so you wouldn’t really have the luxury of looking at what you’re filming and even when you’re resting, trust me when I say your hands are going to be too dirty to handle the screen. Personally I wouldn’t want to get it dirty.

On extreme and risky outdoor activities, here is which camera you should take:

On a mud run or anything dangerous, I like the GoPro 4 because of it’s durability, BUT if you already got yourself the newest one, PLEASE make sure you get yourself a FULLY protected cover, then the durability question evens out for both cameras.

So which camera is superior? 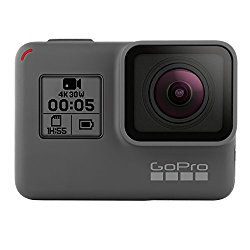 In terms of comfort and convenience, the Hero 5 really is superior and I strongly recommend it if it’s your first Gopro. But if you already have a 4, unless you are a camera fanatic and have a spare another $400+ (camera + case), you’re fine with your current one.

Overall, you can buy one, or both, either way you will be happy with them. I am loving my cameras and am happy I decided to try them both instead of sticking to just one.

Let me also say that for the next mud runs I did, I still took my Hero 4 Black with me and was perfectly happy with the video and photos I took. Because I had already invested in 3 batteries for it and only 2 for the Hero 5 Black, I decided it was safer to take the 4th one with me and considering how the photos were the same (and in my opinion, so were the videos), I can’t really say the 5th version is that much better.