Everest is an obstacle on Tough Mudder that I personally found to be deceptive in that it looks scary but is actually easier to conquer than most people think.

Here is an awesome picture of my uncle making his first attempt at passing it: 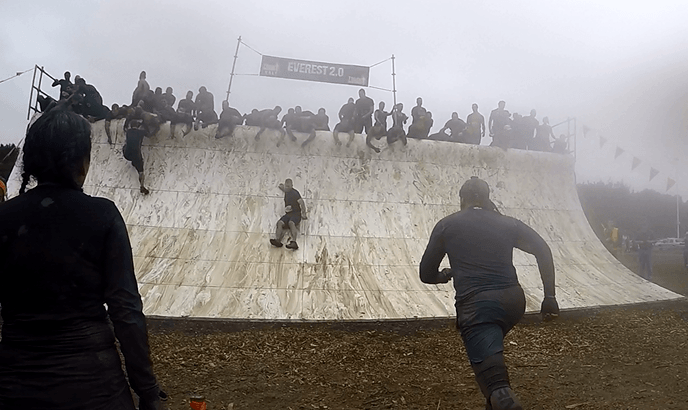 And he did it. Then it was my turn. 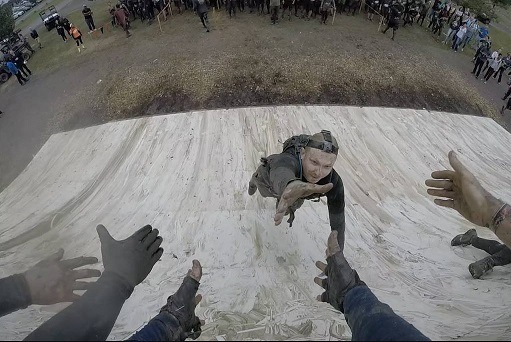 Now he weights more than me. I am also faster than him and have a stronger spring when I jump.

So it would be no problem right? Well here’s a great picture he snapped from his Gopro:

In fact, this would become the BEST picture out of all the videos and pictures we took while on Tough Mudder.

However, if I told you that in that moment he captured, that I actually missed the top and fell, and then fell 4 more times, it wouldn’t make this picture that good, but unfortunately that’s what happened, despite my “superior” attributes.

How was it that I failed? And why do so many others fail Everest?

Well after beating it after the 5th or 6th time I tried it, I can finally give you a few tips.

5 tips that will guarantee you beat Everest:

A lot of people I noticed become very intimidated by it because they think they’ll slip and/or the height of it gets to them, so their instincts make them slow down just before they start to run up. Basically the same tips I gave to scale walls apply to Everest as well.

But this is where you need to actually exert all the energy even more. In other words, you have to push even harder on that run leading up to the wall and then get one more push to try and run up as far as you can because the higher you can reach, the easier then next tip will be:

2) Depending on how far up the wall you reach before you naturally start to slip down, you’ll have to spring up. If you’re close enough to the top, you can reach it yourself, if not, there will be people who will grab you. But the spring is something you need to practice at home to get used to the sensation. Maybe run towards a bench at a jogging pace, then step with one foot forward on it, then spring up to practice the motion itself.

3) Do not be afraid to fall along this wall. Remember, I said this wall is deceptive because it’s so high, but after falling multiple times on it, I can tell you that it doesn’t hurt and that you’ll be fine. The arch of the wall makes it so that you fall either on your stomach, back or your side and slide back down.

Just in case you’re not wearing good shoes, when you start to run up the wall, keep your arms in front of you just in case you slip to avoid hitting your face. But based on all the people I saw go on Everest and slip, none of them had that problem.

4) If you fall once, take a minute before running back up again. I made the mistake to continually try and run up the wall over and over. It’s amazing how quickly Everest 2.0 can exhaust you.

I had to take a break and let other people because I just got tired of exploding up the wall and then falling back down over and over.

5) Make sure if you have ANY weights, to leave them on the side of the wall or give them to a team member who passed this challenge.

If you’ve been wondering why exactly I fell so many times along this obstacle, this was the main reason why.

You see, all along this race, I was carrying my hydration pack with most of our supplies there and it was also filled with water. Overall, there were a few pounds of extra weight that I had to carry and until I reached Everest, I didn’t worry that it would impede me, but each time I ran up the wall and fell, I always though that there was something pulling me back the entire time I was trying to run up as fast as possible.

The funny thing is that the backpack I was carrying was not something that crossed my mind as being the reason because I became so used to carrying it that I forgot it was even on me. You can see in that picture that I had it on me.

Well after catching my breath, after all the falls, I decided it couldn’t hurt if I tried to take it off, so I did and put it on the side, then made my next attempt at scaling Everest.

And wow, what a difference. I ran up that wall so fast that I honestly felt I could have done it without anyone helping me. It was amazing to see how a few pounds of weight made passing this so much harder than it had to be.

So if you’re carrying anything that weights over a pound, give it to someone and you will see a remarkable difference in lightness and weight and it will only add to your spring/speed.

Now I do want to add that I kept my hydration pack on me for the remainder of the race, but some of the obstacles I had to go over made it tougher to do with the backpack on me. On Tough Mudder specifically, I would say the bag came in handy half the time, but it was still necessary as it held some very important supplies.

On something like the Spartan Race, the bag came in handy 90% of the time. So I do still recommend you keep it on you, but take it off and/or give to someone according to the obstacle/s you have to face.

Overall Everest can be beaten easily if you practice the motions necessary to run up it, without the fear of falling on it and also without any extra weight on you!

Even though these tips work, practice beforehand.

It can be easy to read a tutorial on Everest, but it’s more than likely that when you go on your first Tough Mudder and see it, that it can become intimidating and all these tips I gave can be forgotten which is why I am going to give you a practice tip before you attempt it:

You can try to practice wall jumps in areas where its legal and the wall itself doesn’t have to be arched like Everest. Just practice running up to, jumping on a wall to get your body and mind used to the sensation of doing it and if you want to try and recreate the Everest feeling, find a skate board park and try running up the obstacle courses there as it’s pretty close to the one on Tough Mudder.

12 thoughts on “How to Conquer Tough Mudder’s Everest on Your First Try.”